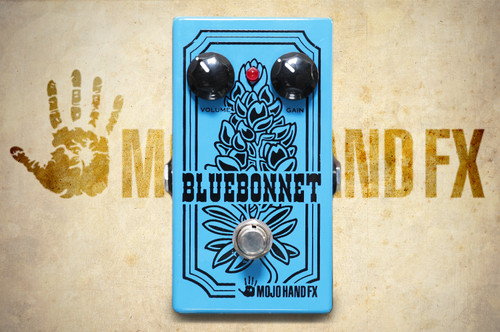 Sweet Texas Heat... The Bluebonnet is a streamlined, straight to the point tribute to Lone Star Tone. Designed to be the ultimate grab-n-go dirt pedal, its simplistic dual control layout (Volume and Gain) makes it a natural extension of your amp. Crank the Volume knob to give your rig a boot to the tubes, or dime the Gain and watch your licks scorch like the sun on a summer day in Dallas. With no Tone or EQ controls, we've voiced the Bluebonnet relatively flat: not too bright, not too dark, no "honky" mids...just nice, smooth and neutral.

While the Bluebonnet's design favors simplicity over versatility, thats not to say its a mere one trick pony. Whether its used to add some grit to a clean amp, kick an already overdriven amp to the next level, or used as a base tone to stack other pedals...the Bluebonnet delivers classic shades of drive smothered in Tejas Mojo.